Have you heard of the term eVTOL? If not, don’t worry, you’re not alone.

The term “eVTOL” is a relatively new concept, and stands for “Electric Vertical Takeoff and Landing.” It’s the technology that the next generation of aircraft (and the first generation of flying cars) will use. Hyundai doesn’t intend to be left behind, and has designs on being an integral part of the transformation that completely changes the way people use and interact with urban transportation infrastructure.

Hyundai recently teased a new concept vehicle at the Consumer Electronics Show (CES) in Las Vegas in January, complete with a full-scale prototype on display. Not only did Hyundai announce that they would be mass producing these EVTOL vehicles in the future, but they also revealed that they will be supplying them to Uber for its upcoming air taxi network!

It was only a few years ago that Uber announced its intentions to leave the roads behind by building a future high and above the normal gridlock of rush hour traffic. Now, its air taxi service is one step closer to reality, with test flights scheduled for 2020 and plans in the works to release a version of the service in select U.S. cities.

Hyundai is keen to be a part of this new high-flying future, and they’re not simply stopping at airborne vehicles. They also released concepts for what they call a “landing hub” as well as ground transportation vehicles designed to bring travellers to and from the eVTOL station. At this point the vehicles themselves resemble beige rectangles, and the plan is for them to use AI to drive in platoons along optimal routes, speeding up the process.

Hyundai’s prototype on display at CES featured two tilt-rotors on the tail, as well as  ten other rotors distributed around the cabin. The next-gen flying car is designed to take off vertically, transition to wing-borne lift during the cruising phase of the trip, and then transition back to vertical flight mode to land.

The vehicle will have enough space to fit five comfortably, and will boast a cruising speed of up to 290 km/h. Soaring between 300 and 600 meters above the ground, Hyundai indicated that by using smaller, electric-powered rotors, the vehicle will produce less noise than a combustion engine helicopter. That’s good news for anyone worried about noise pollution. Incredibly, the vehicle will require less than minutes for recharging, providing it with a range of up to 100 kilometers between charges. 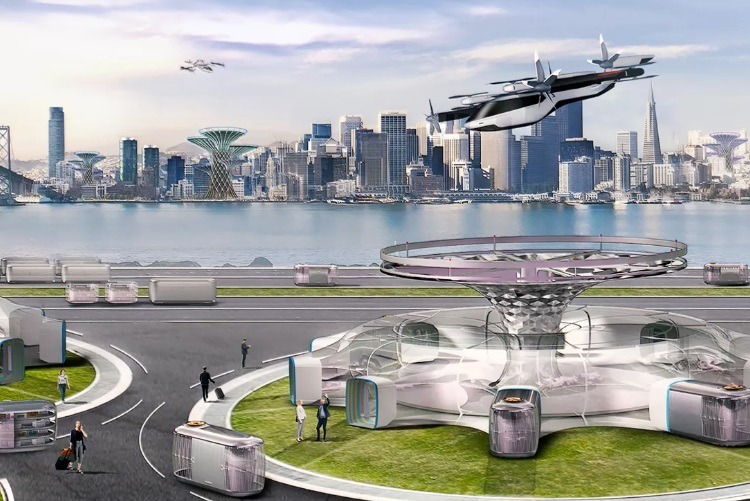 Coming Soon to a City Near You?

While all of this is undoubtedly exciting, the designs remain mostly “on paper.” There is no indication of the cost of such a flying vehicle, nor has Hyundai actually conducted any flight tests. So while Uber hopes to realize it’s airborne taxi dreams by the mid-2020s, it’s important to recognize that the technology has a long way to go before it’s ready for the public, not to mention the expected regulatory hurdles that will stand in the way of this project’s success.

Perhaps with the entry of a car manufacturer into the emerging world of flying cars, this new industry will be able to combine the high safety standards of the airline world with the efficiency of large-scale production typical of the automotive sector.

Abbotsford Hyundai Has It All (Almost)

If you live in Abbotsford and want to get your hands on one of these flying beauties, you’re going to have to wait. Realistically, it will likely be about ten years before all the regulatory red tape is cleared out of the way and the technological challenges have been met.

For now, there are still plenty of options for you to get around in, including a great inventory of new Hyundai sedans, hatchbacks, SUVs, and electric cars for sale. Vehicles include models such as the Accent, the Elantra, the Ioniq, the KONA, Santa Fe, Sonata, Tucson, as well as the Veloster. They may not be able to take off and soar above the traffic (yet), but each one is a quality automobile worthy of your attention.

Come see us today, or give us a call and we’ll be happy to answer any questions you have.